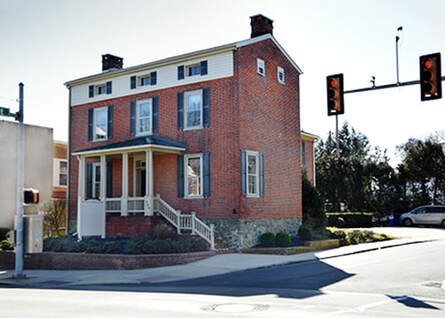 The original house was built in 1818 by Nathan Sharples for his mother, according to the will of his father, William Sharples. Gilbert Cope, historian, tells us that the brick for the house was burned by Nathan on his own property, as was the custom of the time. The building's current moniker 'Brickman's' is intended as an homage to Nathan Sharples' brick-making prowess.

In 1863, the house was bought by Joseph Kift, an Englishman, whose wife was Jane Leslie of Edinburgh, Scotland. Joseph and Jane Kift brought up nine children here. Presumably, the kitchen wing was added when the family increased. Joseph, starting as a gardener, worked his way up to florist, and eventually his greenhouses covered almost the whole East side of the square between Dean and Union Streets. Both Kift and Philip Sharples, Nathan’s son, co-operated in the Underground Railway. Kift and his son, Joseph, also became prominent in the nursery business, bringing, for one thing, the first Bermuda lilies to America. The Golden Wedding of the Kifts was celebrated here in 1901; three hundred people were said to have called. The house was sold in 1923 when Mr. Kift’s health failed. It passed through several ownerships until 1959, when the Family Service, in need of offices, bought it.

In October, 1960, guided by the Chester County Historical Society, restoration was started under W. Nelson Anderson, architect. First the outside was restored to make the building weatherproof and to prevent further deterioration as in the cornices. A large veranda, sagging on its supports, was removed, and a smaller white porch with side entrance, circa 1870, replaced it. This porch picks up the spirit of the unusual latticed attic windows, which are of the Regency or Federal period.

The restoration and renovation of the inside of the building was done in 1962. Here the aim was to make the building functional for the counseling work of the Family Service and yet to keep it in harmony with its tradition, both on limited funds. To further the latter aim, the fireplaces in the two front rooms were opened. Traces of woodwork for the mantels were found on the plaster, and Mr. Anderson was thus able to follow the molding outline in restoring.

A reception room, a director’s office, and a business office have been achieved on the first floor; a board room, one office room, and two small interviewing rooms, on the second floor.

In January, 2018, H. Frank Rupp, Jr. and his wife, Susan, co-owners of Painter House Suites, LLC, purchased the property with the intent of continuing it as an office building for small business owners. The building currently boasts five private office suites and a shared conference room on the second floor. As technology has become more discreet, the building now includes a sophisticated wireless automation system that allows tenants keyless access to the building and offices all without disturbing the building's natural, historic charm. Other improvements included the removal of a bulky A/C unit that was mounted on the roof of the rear of the building. The A/C unit is now tucked neatly in the rear courtyard with a custom air handler now installed in the conference room's closet. The rear roof was also replaced with a new, raised-seam metal roof matching the original green, tin roof. Mr. Rupp took great care in maintaining and preserving the existing architectural elements while also providing a safe, convenient and comfortable place for office tenants to reside. In regards to future restorative updates, Mr. Rupp is planning to replace the exterior vinyl window shutters with time-period appropriate wooden shutters.

So now the old house starts on a new era with every possible effort made to retain the dignity of its architectural tradition.

The historical information comes through the courtesy of the Chester County Historical Society. 1962.